The most terrifying music genre the world has ever seen

Invented by Ryszard "Crunk King" Kuklinski (the grandson of an infamous Polish Cold War spy of the same name), Crunkczar, which sounds a bit like Polish donk, is a terrifying new genre that makes ravers lose control of their bodies. The drug of choice is a pharmacy technician cocktail of carfentanyl, a downer that's approximately 10,000 times more potent than morphine, and Dexedrine, a powerful amphetamine. (Young fans opt for something slightly less harmful: a mixture of Red Bull and sherbert, referred to as "crunk gunk".)

Some people will break both their arms and continue dancing all night as if nothing has happened. Also, numerous cases have been reported of people dancing so fast that their heart gives in and they drop dead on the dancefloor.

At one rave at the end of last year, when the above song was pitched up to +16, three people dropped dead before the track had finished.

Full story over on guardian.co.uk/music.
Posted by John at 10:31 am 7 comments:

TRC combine the chagrin and angst of hardcore with some grime-style rapping. Read all about it over on guardian.co.uk/music. 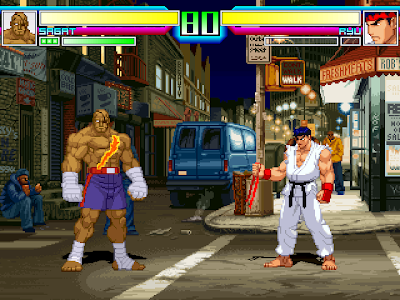 For the latest Bass Odyssey column on thefader.com I had a mole implanted on the Newham Generals' table at the NME Awards, who reported back on the important things like how many cocktail sausages Footsie was eating (the average for the whole night was 48 per hour). The mole (Jack from Friendly Fires) also did a mix of classic house and bleep and stuff, which you can listen to below. Tracklist in comments.

Top five explanations as to what Kanye West might be doing with his head in the lap of his girlfriend, Amber Rose, backstage at London Fashion Week 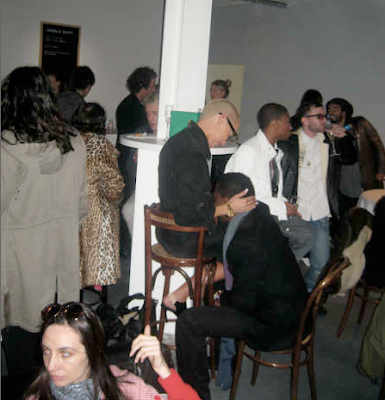 1. Warming his metallic jaw
2. Licking some cheese and chive dip from her skirt
3. Publicly proving, once and for all, that he is not gay
4. Seeing if she's wearing the limited edition Ed Banger x Cobra Snake x Louis Vuitton knickers that Kid Cudi exclusively designed for Kanye
5. Rummaging for a penis

(Picture half-inched from the Vice fashion blog)
Posted by John at 12:01 am 8 comments:

I got Smutlee to do a short mix of dancehall, funky and garage stuff for the Vice music blog last week. It's real nice. Tracklist in comments.

The people at VBS recently travelled to Burnley to meet with donk's main man, and a personal hero of mine, MC Grimzie. This guy's like Snow multiplied by Bernard Manning, to the power of that "Louish Walsh" [sic] X Factor guy.

If you haven't heard "Sexy Nun", his X-rated ballad which describes in sickening detail his seduction and rape of a lady of the cloth, I implore you to go and listen to it now. It's utterly offensive in every way. VBS got some footage of him performing an a cappella version of it in a church but it unfortunately didn't make the final cut.

He really is a hero of mine, though. He's a rule breaker, he's a risk taker/ Cookin' up rhymes as quick as a baker (makes bread). Sorry, I just broke into a freestyle rap there. I do apologise.
Posted by John at 12:08 am 2 comments: 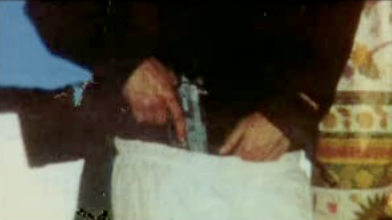 This just in from my friend Ted: "I've met the attempted murderer in that documentary on your Fader column. I moved into his old house in Clapton Park Estate about eight years ago. He had photos of himself holding knives lying around. Lots of gaunt, wild-eyed people kept calling by asking for him and Transport For London sent about 20 letters addressed to him during the two years I lived there. We found a photo of him posing and put it on the wall as a memento." 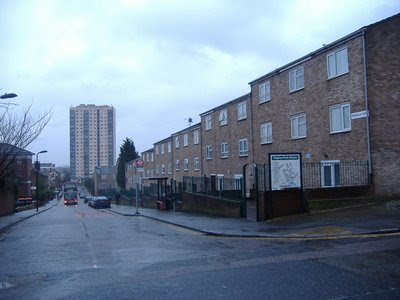 The rather picturesque estate in question.

To find out more about the house, I asked Ted to come down to the station to help me with my inquiries.

Detective Chief Inspector Prancehall: What was the house like?
Ted: Grey, bars over most of the windows, but big. It had three floors, a big kitchen and living room, and was very cheap. I think I paid about £250 a month.

Fill me in on the general decor.
Erm, it was minimal. When he was still there, there were knives lying around upstairs, and a relaxing scent of weed.

Was it fully furnished?
It had a greeny-beige three-piece-suite, beds and cupboards.

Carpet or a wipeable surface on the floor in the bathroom?
Wipeable laminate surface everywhere except the stairs.

Did you have a garden?
Yep, but never bothered with it.

Was there a mice problem when you moved in?
No sir. 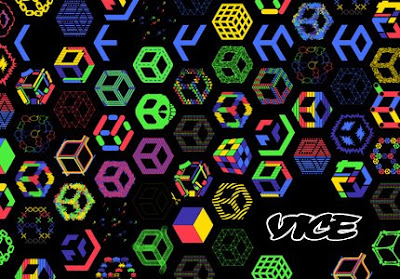 I've been looking after the Vice site this week so I got Bok Bok, Crazy Cousinz and Jackmaster to do a wee mix each for the music blog. You can get them all here.
Posted by John at 1:38 pm No comments: