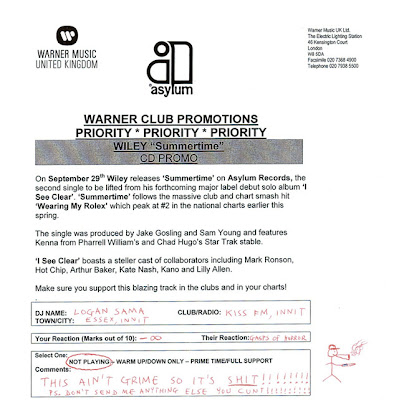 I was sent the above by a reader yesterday. I'm gonna be honest with you guys and say I am not 100 per cent convinced the writing on the form is by Logan Sama. I'm not sure why, I just have a sneaking suspicion.

The score for the new single, "Summertime", is pretty apt, though: minus infinity. Surely there is not one person who doesn't find that chorus cheesy and annoying.

Also, have a look at the info about Wiley's new album, I See Clear (terrible name, eh?). He's working with Mark Ronson, Arthur Baker (has this guy produced anything worthwhile since "Planet Rock"? Doesn't he just run restaurants now?), Lily Allen and Kate 'I LIKE DRINKING TEA' Nash. I wonder what he will make with Nash. Maybe a song about pie and mash. He could do a remix of "Pies".

One thing's for sure: it can't be any worse than that career ender of a song she did with Kano.
Posted by John at 11:23 pm

god, wiley's album will be another flop.

haha some teenagers on grimeforum have nicked this and think it was actually written by logan..